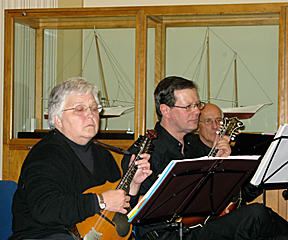 L’Esperance came into existence in 1994 for a fundraiser for the Music School in Providence. At the time the group numbered four people, all adult students at The Music School performing classical music on mandolins. Since then the group has grown in numbers and expanded its repertoire to include music from a wide range of styles and cultural heritages reflecting the diversity of ages and backgrounds of its members. Early performances included engagements at the Whole Foods Market for an international fair and performances at the Providence Preservations Society’s House and Garden tours.

The name l’Esperance is from the French for hope. It was adopted in 2003 to resonate with Rhode Island’s state motto — Hope — and the hope that l’Esperance’s music will embrace the cultural diversity and musical aspirations of its members.

Today, the ensemble includes nearly 20 members, folks from all over Rhode Island, Eastern Connecticut and Southeastern Massachuetts. With an age range varying from 15 to 80+, l’Esperance brings together a wide range of gifted musicians from a wide range of backgrounds. From the scant handful of performers that began this musical expedition a decade and a half ago, l’Esperance now includes a full compliment of mandolin-family instruments including mandolins, mandolas, octave mandolins, mandocellos, mandobass and guitar.

Director of l’Esperance Mandolin Ensemble Joshua Bell was named the Concertmaster of the Providence Mandolin Orchestra in 1979. He has played with the North American Mandolin Ensemble, The American Mandolin and Guitar Orchestra, the Classical Mandolin Society of America and The Takoma Mandoleers of Washington, D.C. He currently teaches mandolin, mandola and mandocello at the the Mediator Fellowship in Providence, at the Knapp Music School in Wakefield, RI and at the Cataumet Arts Center in North Falmouth, MA.